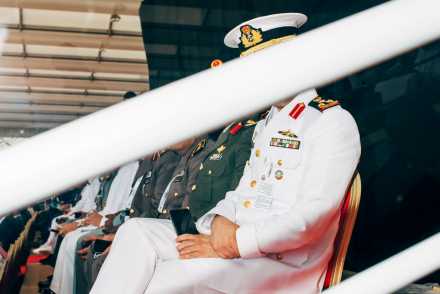 Nothing personal - the back office of war

Everyday on the news we are confronted with pictures of war and destruction and the expenditure on armaments is setting new records year after year. Let‘s take a look at the other side of the subject – behind the curtains of the global defence business. "Nothing Personal" shows the back office of war, which is the complete opposite of a battlefield: An oversized playground for adults with beer, vine, fingerfood and shiny weapons. Dead bodies here are mannequins or pixels on screens of a huge number of simulators where also bazookas and machine guns are plugged in. War action is staged in an artifical environment infront of a tribune full of high ranked guests, ministers, heads of states, generals and traders. I deliberately don't show faces. It is not my intention to fix everything upon a certain person but show the system. The anonymized traders with Weapons covering their Heads could be seen as a reference to John Heartfield's anti war drawing from the 1930ies before the WW2 "Dangerous Dining Companions". I like the Idea of this symbolism. In the worst case, you will find these weapons on real battlefields someday, in civil wars, or in the hands of dictators opressing their own people. Most of the companies are also working in the civil sector and most of the developments you can also find in your everyday life, beginning with computers and internet, the list is endless. The pictures have been taken at 13 highly exclusive defence exhibitions between 2016 and 2019 in Europe, Africa, Asia, North and South America (Poland, Belarus, South Korea, Germany, France, South Africa, China, Abu Dhabi, Peru, Russia, Vietnam and the US). "Nothing Personal" has been exhibited in Straßburg, France, Biel and Geneva in Switzerland and has been supported by the german VG Bildkunst research grant in 2018 and the PH Museum Grant in 2019.

Nikita Teryoshin, Russia, describes his photography work as “street, documentary and everyday horror”. Raised first in St. Petersburg and then in Dortmund, where he earned a BA in Photography, Teryoshin is currently based in Berlin. Teryoshin worked for 4 years on his first longterm project about the german industrial dairy cow. The way of treatment and the artificial world cows are living in, reminded him on the Matrix movies. It was shocking to realize, what human are willing to do to an inferior creature in the name of efficiency. The series was published on the cover of the German VICE Magazine and widely discussed on the internet. The next longterm project was "Nothing Personal - the backoffice of war". Between 2016 and 2019 he visited 13 Defence Fairs on in 12 countries to give an insight on the global arms trade. Supported by the VG Bildkunst and PH Museum Grant. In September 2019 he participated at the Joop Swart Masterclass in Amsterdam and started to work on his new series "I've never been to Russia". He works as freelance photographer for magazines as SZ Magazin, ZEIT Magazin, GQ, Spiegel and Stern. His personal projects have been published in VICE, Le Monde M, Vrij Nederland, ZEIT Magazin, GUP Magazine (NL), WIRED, Süddeutsche Zeitung. His first solo exhibition took place in Strasbourg, FR at La Chambre in September 2017. In 2019 he won the first prize at the Miami Street Photography Festival and PH Museum Grant First Prize with the "Nothing Personal" series.