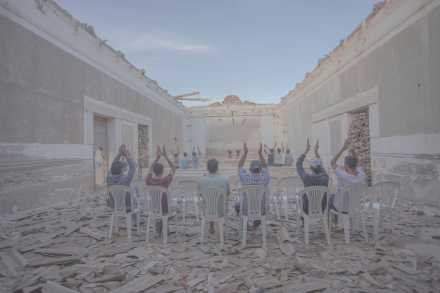 In 80 Miles to Atlantis, Imane Djamil works closely with a group of friends born amongst the ruins, in search of a long lost time, fantasized from a nostalgia point of view. Together, they reinvest in desolation as a playground and the ruin as an element to reclaim in this collaboration. Taking place in the Sahara, which is, now more than ever, in the spotlights, the creative process was challenged by state policies. As put by M’hammed Kilito in an interview on Tribe Magazine, "we live in a country where the authorities still have reflexes from the years of lead during king Hassan II rule. Taking pictures was very badly seen and for this reason we often still get arrested when we take pictures in the street". Despite the warnings the photographer and her collaborators were subject to from the authorities, it did not prevent them from introducing the city of Tarfaya, not only through quick shots giving an overview of the city's situation, but through the slow creative process that staged photography implies, including in locations controlled by the military. The series interrogates the multiple layers of symbolism in the built and natural landscape, colonial architecture’s redefinition over time, and the blurring of lines between reality and myth. The themes the artist's work explores are of poignant relevance to today’s world – the quest for a symbiosis between urban development and the natural environment, the state’s failure to uplift communities at the margins, and negotiating relationships between the colonial past and a post-colonial present and future. Through her practice, Djamil never ceases to confront the complexity of people vis-à-vis their physical environment. "Fearless" raises the question of how crossing boundaries and challenging a place is sometimes necessary to help shed light on an issue and have a social impact.(...) Tina Barouti, curator and art historian.

Imane Djamil (b.1996, in Casablanca, Morocco) is a Casablanca-based artist whose practice spans photography, storytelling, and creative-writing. Her work straddles a very fine line between reality and the sublime in what she calls ‘mental geographies'. Her work, which is located at the crossroads of fine-art and documentary photography, explores places in ‘post-traumatic transition,’ where History engenders a metaphorical dialogue with personal and political anecdotes. Djamil has participated in several residencies including Escales liées at The French Pavililon of the Venice Architecture Biennale in 2018, Mujeres y el Mediterráaneo in 2019 at the Casa Mediterraneo in Alicante, Spain in 2019, and most recently the the Summer’s Lab at le Cube- Independent Art Room in Rabat, Morocco in 2020. Her work has been exhibited throughout Europe and Morocco, most notably as part of Le Maroc Contemporain at Institut du Monde Arabe in Paris, France in 2014 and, En un instante, Marruecos at the Casa Arabe as part of PhotoESPAÑA’s official selection in 2018. In 2021, she was awarded the New Narratives in Environmental Photography prize by Fisheye magazine and La Gacilly photo festival for her work 80 Miles to Atlantis, and was among the European Union's All-Around Culture 4 year programme grantees for her project "Murs mûrs".