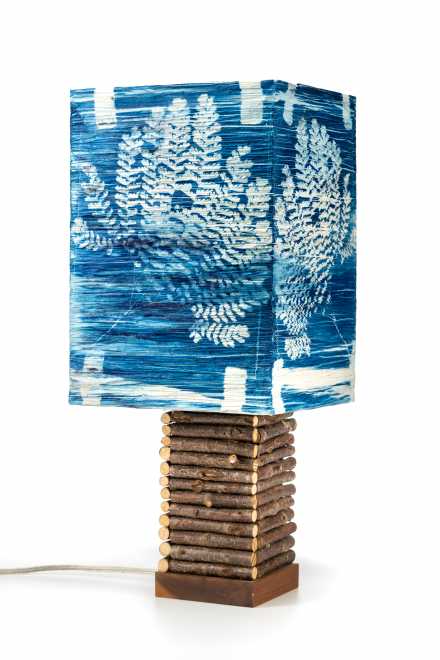 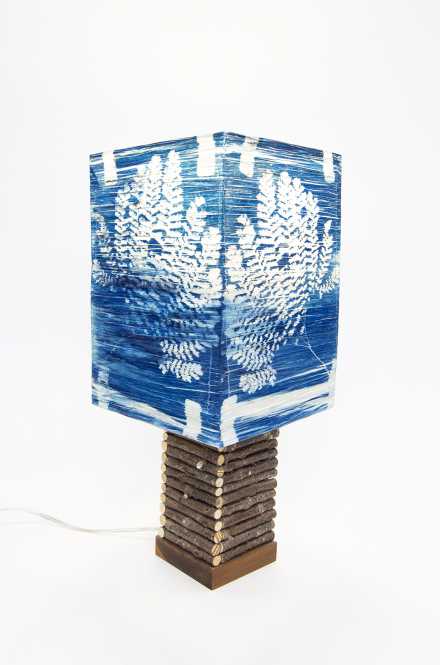 In 2020, Robert built an analog darkroom in their home, inspiring Robert and Dana to explore alternative photographic processes, including Cyanotype. They began a new body of collaborative work combining Robert's printed camera-created images on watercolor paper and Dana's camera-less images on translucent surfaces, including rice paper. This Rustic Lamp is a collaborative piece: the base constructed by Robert and the cyanotpye nature prints added to the lamp shade by Dana.

Robert Batey and Dana Cohen met while studying architecture at the University of Tennessee Knoxville, then married while working London. They lived in Philadelphia nearly ten years working as architects and independent artists. Robert began focusing on fine art photography and the two sold collaborative work at art festivals, winning numerous awards. The couple returned to East Tennessee in 1995 and began Robert Batey Photography, specializing in architecture, real estate, products and portraiture. Since 2001 they have volunteered for Arrowmont, the United Way, Sevier County Arts Council, and were founding members of the Gatlinburg Fine Arts Festival.  They exhibit regionally and were recently juried into the 20th Sevier County Biennial Juried Exhibition at Arrowmont.

"I feel that being trained as an architect, and working an artist has given me an added appreciation of the thoughful design that goes into creating an object form the smallest ring to the largest structures." - Robert Batey