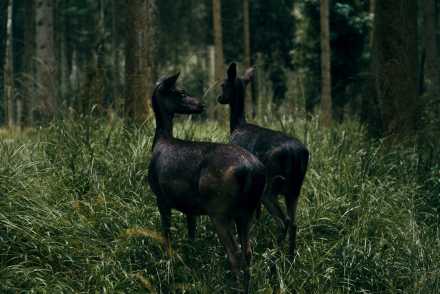 Path of Pins is a visual re-telling of Little Red Riding Hood, revolving around adolescence and the fluidity of female representation in folklore. In one of the earliest spoken versions of the fairytale, which later inspired Charles Perrault to write his ‘Petit Chaperon Rouge’, the wolf asks the unnamed heroine: “Which path will you take?”, to which she responds by choosing the path of pins, the careless and fleeting one – as opposed to the path of needles, the irreversible way of the wolf. This decision of the pins reflect two interesting aspects: On a personal level, by refusing to follow the prescribed path, the heroine decides to stay a child and favours the state innumerable possibilities. Exploring what lies beyond, she leads us deep into the forest. On an abstract level, this metaphor of pins and needles relates to how fairy tales are being treated: Like a butterfly collector, Perrault kills the living, ever-evolving oral tale, to present it to the reader in a pose he artificially forced upon it: He coerces the heroine into the corset of his ideologies. Compared to the early variants of the narrative, where the heroine tricks the wolf, Perrault reduces her to a naive girl guilty of her own violation. The fairy tale questions authorship: Every form of retelling or reenactment embeds former versions of it, repeats it, alters it, so it will never be original – no authorship can be claimed over it. The fairy tale gives birth to itself. Therefore I work with my friends, my family, my own body. It is a dreamlike state, where logic does not apply anymore and time works differently. The preconscious mind draws connections, develops a narrative I wasn’t aware of and finds analogies between this universe and reality, stitching these worlds together. The tale develops, slowly, growing with each iteration, like a living creature.

Nadja Ellinger is a visual artist interested in the oral tale as a way to explore new narratives offside the path. She was born in 1993 in a small medieval village in the middle of Germany. Spending most time in the forest and in books she fell in love with fairy tales, folklore and storytelling. After completing her bachelor’s degree in photography at the University of Applied Science in Munich, she studied for her MA in Photography at the Royal College of Art in London from 2018 to 2020. Nadja’s work was exhibited and published in the UK, US, Italy, Germany, and France. She worked on comissions by clients such as Vogue USA and NR Magazine and held her first solo show with her project “But a Mermaid has not Tears” in Munich, Germany. In 2020 she was one of the finalists for Camera Work in Ravenna, Italy, and exhibited at Voies-Off in Arles, the Ginnel Foto Festival, and the ‘Other Identity’ Biennal in Genova, among others.