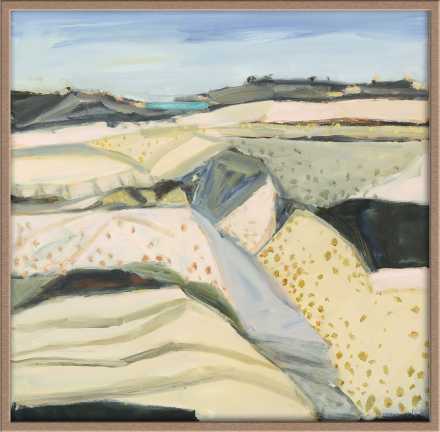 Jo Bertini’s paintings traverse well-worn landscapes in an exploration of the true nature of wilderness. Drawing from the traditions of artists on scientific and ecological survey expeditions into the most remote and inaccessible regions, Bertini celebrates her long and intimate engagement with the desert. Her work bears witness to natural and human histories of nomadism observing the seasonal rhythm of landscapes and the people connected to them. With loose yet refined brushwork, she finds a balance between simple and complex, rescuing beauty from desolate landscapes.

Jo Bertini has chosen to donate 100% of the proceeds from this work to NSW Wildlife Information, Rescue and Education Service (WIRES).

WIRES (NSW Wildlife Information, Rescue and Education Service Inc.) has been rescuing and caring for wildlife for over 30 years and is the largest wildlife rescue organisation in Australia. In WIRES history they have never seen a concurrent series of emergencies events like those that began in November. Hundreds of fires over weeks have burnt over 4.9 million hectares of land in NSW alone. Many animals were already struggling with a lack of water and food due to the drought. With the fires destroying unprecedented amounts of habitat, food shortages have increased and lack of suitable habitat will be a significant long-term challenge for surviving wildlife.