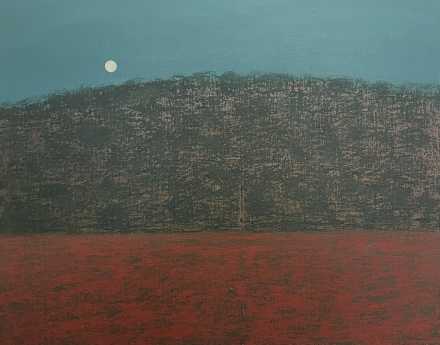 Title: Inland Moonrise
Size: 61cm x 77cm
Materials: Oil and wax on linen (unframed)
Representing gallery: John Lloyd Gallery
Retail price: $1,400
“My work is best described as abstract landscape with a specific interest in colour and mood. Most of my work is created from my imagination although I will, at times, refer to sketches and photos I have taken. My paintings follow two distinct themes – on one hand, muted and tranquil and, at times, minimal renderings of country scenery, on the other, bright and cheerfully irreverent patchworked pieces where multi-coloured hillsides are scattered with understated trees and fencelines. Tracks meandering toward the horizon, fence posts with cut remnants of broken wire and birds like crows, magpies and cockatoos are familiar elements in my work, often conveying a sense of vastness and isolation.”
— John Lloyd

After a successful career as a musician playing in Melbourne in two of Paul Kelly’s early bands namely The Highrise Bombers and Paul Kelly and the Dots, and in Sydney playing with Flowers and Icehouse, John Lloyd returned to his love of art, which he studied in Tasmania in his late teens.

During the past fourteen years as a professional artist, John has had 17 solo exhibitions in galleries in Melbourne, Sydney and South East Queensland. His work has also been shown in 30+ shared exhibitions and can now be found in collections throughout the world.
He is now based in his own gallery in Kyneton, Victoria.