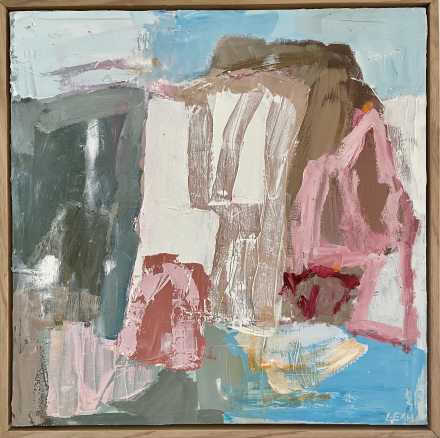 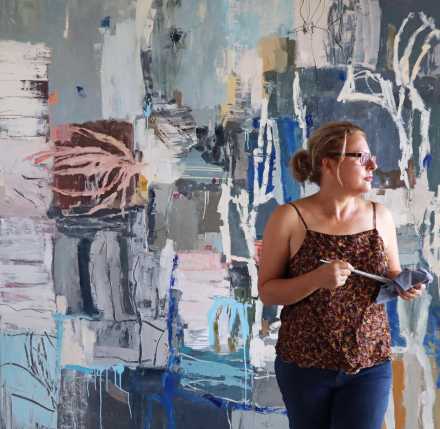 Title: Broadwater
Size: 53cm x 53cm
Materials: Oil on poly cotton, raw oak frame
Representing galleries:
Reserve: $500
Retail price: $2,000
Leah Thiessen grew up on the Northern Beaches in Sydney and relocated to Northern NSW in 2008. Growing up she always pursued the arts, studying fashion design at East Sydney College and working as a designer in the fashion industry.  Moving away from fashion and seeking a connection to the fine arts, in 1998 Leah completed a Diploma of Fine Arts in Sydney alongside a Certificate in Ceramics at Brookvale TAFE.

In 2014 she successfully completed a Bachelor of Visual Arts at Southern Cross University. Since her completion, she has had numerous solo exhibitions while taking part in many group exhibitions in different galleries thoughout Australia, including an exhibition for emerging artists at Watters Gallery, East Sydney 2016.

Leah has been selected as a finalist in many prominent contemporary art shows, such as the Paddington art prize, The Gold Coast Art award, The John Leslie art prize, the Calleen art award, The Clayton UTZ and The John Glover Art Prize in 2020.  She has also received a highly commended at the prestigious Natural Science Art Award in 2014 and in the Gosford Art award 2017. Leah's work has also been acquired for the Arthur & Suzie Roe Collection in Melbourne- 2020.

Leah continues to paint and explore abstraction and the emotional gravity of place in her studio which is situated on the water’s edge in Northern NSW. Her work is a constant investigation about capturing the pulse and rawness of the land she is immersed within.