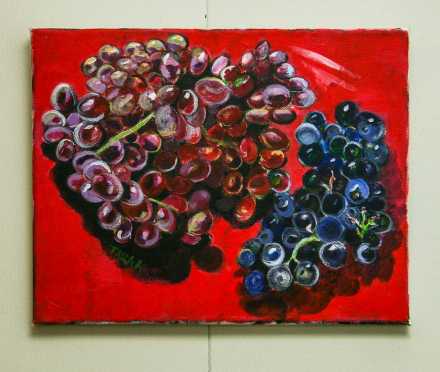 This painting of a bunch of ripe grapes is the early work of folk artist and award-winning book illustrator Tara Anderson, who trained at the OCAD, and who is now known for her lively and humorous animal illustrations. Her work includes illustrations in the books Sapphire the Great and the Meaning of Life, Rhino Rumpus, Pumpkin Orange, Pumpkin Round, Harvey Comes Home, and A World of Kindness. Her debut That Stripy Cat was followed with Nat the Cat Can Sleep Like That, which won the 2014 Preschool Reads Award and was nominated for the 2015 SYRCA Shining Willow Award. The antics of Nat and his kitten friend are inspired by the cats who roam her farmhouse near Tweed, where she lives with her husband and daughter. Tara's latest illustrations are in the newly published kids' book called Easter Morning, Easter Sun which is available at Quinn's of Tweed Art Gallery in Tweed, Ontario.